Fear of the Consequences

There is no question in my mind that if Rangers are found to have been fielding ineligible players, the results of their matches should be corrected to read as 0-3 defeats, in accordance with the rules. Consequently the final league standings in each of the seasons to which this applies should also be corrected to reveal who the true champions were, according to the rules.
This could scarcely be simpler.

Once the appropriate corrections have been made, the separate matter of what punishment should be meted out to the offending parties can finally be addressed.
I argue that nothing short of expulsion is appropriate. We are dealing with unprecedented levels of rule-breaking, probably in collusion with administrators at Hampden Park, incalculable damage to the reputation and development of Scottish football and, even now, chaos and turmoil which is destabilising the entire structure of the game.

But fear of the consequences appears to have induced a paralysis which is preventing the correct response from even being recognised, never mind being enacted.

A club which has been found guilty of consistently fielding ineligible players on a massive scale and, furthermore, actively concealed the paperwork which would have exposed the ineligibility is simply not fit to be a member of any organised league. Not is it fit to have SFA membership. Thus the record should clearly show that its punishment is either complete expulsion or a <em>sine die</em> suspension which will not be lifted until satisfactory restitution has been made for the damage suffered by other footballing parties.

If a future club wishes to trade as Rangers FC and portray itself as the continuation of the expelled Rangers FC, it must fulfil certain conditions.

Firstly, it must unequivocally recognise and accept that it is inheriting the culpability of the original Rangers FC for breaking football rules over many successive years.

Secondly, it will never make any claim to titles which have been stripped from it in accordance with the game’s rules nor will it ever dispute or question the justice of awarding those titles to any other club which did compete within the rules.

Thirdly, in recognition of the financial damage which original Rangers caused to its peers in the Scottish game, the new club which elects to trade as Rangers FC will forfeit a percentage of its future earnings and prize money for a period of time and at a level which is acceptable to all the clubs which it is found to have disadvantaged. If they can’t compete at the top level with what’s left in the coffers, too bad. Those are the consequences of cheating your way to glory.

Finally, if – and only if – these conditions are satisfied, then everyone else in Scottish football can agree to accept the new club as a continuation of the old Rangers, albeit with a break in its history from the time to which the suspension is backdated up until it resumes trading as a suitably penitent and chastised member club. It could then legitimately include its forty-odd titles in its honours roll while acknowledging a period of misconduct which is a stain on its history but which it also apologises for, condemns and undertakes never to repeat.

The consequences for Scottish football in this scenario would be that a line could finally be drawn under the entire episode.  Honour would be restored all around and a fresh start would finally be possible.

I’m not holding my breath.

All The President’s Men

Thirty-nine years ago time was running out for the thirty-seventh President of the United States of America.  The perception was growing that Richard Nixon was in serious danger of being impeached and might even be removed from office before his presidency had run its course.  Investigations into his part in the cover-up of the Watergate scandal were exposing the corruption that riddled his administration and as more and more damaging revelations continued to unfold, an unimaginable scenario was gradually turning into an inevitable reality.

It was becoming increasingly apparent that Auld Nick really was likely to get nailed, discredited and disgraced.  The processes were gathering momentum, legal procedures were in motion,  political resolve to remove him was strengthening and media which had previously supported him could no longer ignore the reality and scale of the crisis.  Pro-Nixon apologists warned of dire consequences which the nation would inevitably suffer if it dared to bring the President to justice but they were misjudging the mood of a nation that had become increasingly sickened by what it was discovering about its government.  The American people were not scared of facing up to the crisis, however unpleasant it was going to prove. They were determined to dig down all the way to the root of the problem in order to hold the guilty parties to account and also to send a clear, unequivocal message to future executives that a cynical betrayal of the standards expected of them would not be acceptable.
Nixon helpfully tried to reassure everyone and addressed the nation with a denial of any wrongdoing, introducing a legendary soundbite which spectacularly backfired.  Overnight, “I am not a crook,” became a national joke which appeared on tee-shirts, coffee mugs, posters and bumper-stickers.  By that time he was already sacrificing numerous key political allies, many of whom subsequently went to prison, and it was no longer preposterous to consider that Tricky Dicky himself might be sent down once he’d been brought down. 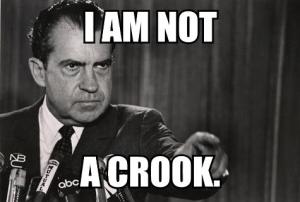 Finally, less than two years after winning re-election to the White House in one of the biggest landslides in American history, with impeachment now looming large on the horizon, Richard Milhous Nixon recognised that he no longer had sufficient political support in Congress to enable him to carry on effectively. He resigned and handed over the presidency to Vice-President Gerald Ford, who was sworn in within twenty-four hours.   Although his resignation released him from the threat of impeachment, Nixon was now liable to face criminal charges from which he’d been immune while serving as the President.

Campbell Ogilvie stonewalls as the wife of a fellow Freemason tries in vain to jog his memory about a long-standing, unpaid debt.

Between 1974 and 1976, the government of the United States of America — the self-styled leader of the Free World and the greatest democracy in the history of the universe — was led by a head of state who was never elected to any office at the White House.  He had become the Veep when the career of his predecessor, Spiro Agnew, crashed and burned in yet another scandal.  Up to his ears in charges of fraud, bribery and tax evasion, Agnew cut a deal in which he resigned from the vice-presidency and pleaded No Contest to the charges in return for which he got to not go to jail.  Nixon had a good feeling that Ford was the type of chap who might be able to bail him out if the worst came to the worst.  Something of a Great Administrator who would never allow any matters of principle or integrity to stand in the way of his own personal advancement, Ford had served reliably and with complete discretion on the Warren Commission cover-up of the John F Kennedy hit.  He had proven himself to be a man who could be depended upon to haul himself up the greasy pole by steadfastly not seeing the crime of the century even when it was presented to him in detail over the course of an entire year while he sat with one of its architects. 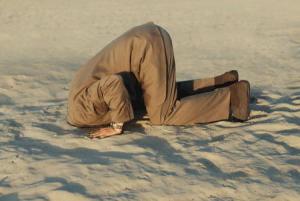 It should scarcely have been a surprise then when, within a month of becoming the unelected President of the U.S.A., Gerald Ford presented the man who gave him his job with a Get Out Of Jail Free card in the form of a “full, free and absolute pardon.”  This instantly removed any possibility of Nixon being indicted for any criminal actions he had carried out when he’d occupied the White House.
The American public bitterly resented Ford’s flagrant insult to their decency and his shameless disregard for their sense of honour. They had endured years of humiliation and disgrace while exerting their best efforts to eradicate the sleazy culture of corruption in which their leaders were immersed. Now, at a stroke, every honourable judicial process, every honest endeavour to set the house in order had been contemptuously dismissed by a hopelessly compromised, spineless rogue, no better than the crooks who had preceded him.  Ford’s Republican party was annihilated shortly afterwards in the mid-term elections and at the very first available opportunity, he himself was replaced by a peanut farmer.
But it mattered little to Ford. He had been appointed to the presidency to carry out one single task – to get his fellow crooks off the hook – and he accomplished that in jig time.

How the Daily Record broke the news of Rangers’ successful appeal to the SFA against Lord Nimmo Smith’s findings.

I can’t imagine why this widely known example of secretive, Establishment mutual back-scratching and gross abuse of power and position to thwart the pursuit of justice suddenly sprang into my mind.  I had actually intended to write about what might happen should the SFA have to hear an appeal if Lord Nimmo Smith finds that Rangers were guilty of fielding improperly registered players for a period of many years during David Murray’s time in charge of the now extinct club.  I’ve quite forgotten what I was going to say now.

A Resistance Site For Victims of CIA, NSA, MI5 and Illuminati Mind Control

In Greek mythology, Cassandra was a cursed prophetess. She was gifted with prophecy but the curse ensured her predictions would never be believed. Not that it stopped her from speaking out. It behoves all of us to speak out about what is wrong but also about what is right. We can do that in our creativity whether it be prose, poetry or painting. What matters is the message.

The kingdom of God made simple.

The facts about vaccine safety your government won't give you